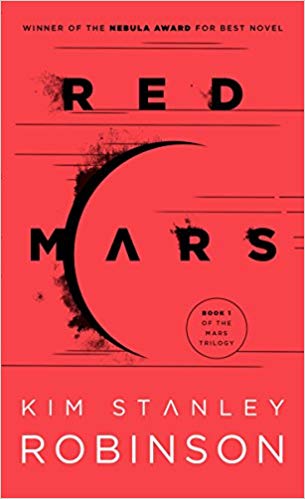 I have mixed feelings about this book.

Robinson paints an extraordinarily detailed view of what life on Mars could be like, from the constituent molocules of the atmosphere down to the interpersonal relationships of the settlers. He leaves out no detail, giving us a very rich portrait of life on the Red Planet. I thoroughly enjoyed the geologic descriptions of the surface; driving across the California and Arizona deserts on a recent road trip made that all the more tangible.

Robinson's technical details are likewise as thorough as one could imagine for a novel, including geology, biology, artificial intelligence, chemistry, and physics.

The price for such detail is, however, a book that tends to move a geologic pace. The book, while as expansive as Mars itself, seems to evolve over eons, only really moving quickly within the last few chapters. Robinson also jumps from character to character over the books many sections, making it difficult to form much of a bond with any single one.

If you plan to sit down with Red Mars, my advice is to slow down and let it take you along, at its own pace; don't fight it. This is a book that wants you to fall in love with Mars, but, at least for me, it wasn't necessarily love at first sight.

In spite of my complaints, the ending did hook me, and I can't help but think that the sequel, Green Mars, will be on my Kindle in the near future.